This Act includes provisions to accommodate hard of hearing people, including incorporating Assistive Listening Systems in new building construction, in alterations or renovations to buildings and facilities of private companies providing goods or services to the public. It also requires that State and local governments provide access for the hard of hearing in programs offered to the public.

Assembly Areas
Under the ADA an assembly area is d

Providing access to the deaf and hard of hearing is mandated by The Americans with Disabilities Act (ADA) signed into law in 1991 and revised in 2010. This law addresses when assembly areas are required to have assistive listening devices (ALDs). 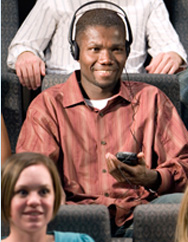 The U.S. Department of Justice (DOJ) is the oversight entity for enforcement of the ADA. The key thing to remember here is that if someone goes to a specific public venue where there is a sound system, and if that individual asks if they have an assistive listening system and they respond, “no.”  This individual can go to the Department of Justice and file a complaint.

Then the Department of Justice can file a lawsuit, this would then go to Court and if the owner of the venue is found “non-compliant” the court can apply “Civil Penalties” in the amount of the $55,000 for the first violation, and $110,000 for any subsequent violation.